It sounds outrageous, I know. But stay with me. This magical fact popped up recently on my favorite NPR podcast, This American Life, in a segment of an episode called Contents Unknown. I highly recommend a listen to almost any of their episodes. In it, NPR’s Adam Davidson interviews Fred van Doorninck and George Bass, two important archaeologists known for being the first to fully excavate a site under water. In other words, many say these are the guys that invented underwater archaeology.

The Yassi Ada (pronunciation: Yassada) story belongs in my world of Creative Possibilities For The Bicycle because in this interview, Bass and Doorninck share a  story of reconstructing a 5th-century Byzantine ship by using thousands of sharpened and delicately-placed bicycle spokes. (Just to be crystal clear, the Byzantine Empire was basically the eastern half of the Roman Empire that had broken off. It existed from around 300 AD to the 1400s.) As the story goes, in the 1950s (or 60s, I’m not entirely clear) Doorninck took a vacation from archaeology grad school and went scuba diving around a ship off the coast of a tiny island near Turkey called Yassiada. Entranced by the 1,400-year-old shipwreck about which so little was known, Doorninck spent the next 50 years reconstructing this ship and analyzing his findings.

Let’s hone in on this bicycle element.

George Bass explains the use of spokes in his interview with Adam Davidson:

“[In] an ancient [ship] on the seabed, the wood is very fragmentary. So if you sweep with your hand to get the sand away, a little piece of wood not bigger than two playing cards put together […] is just going to float away. So we had to figure out some way to keep it all intact while we mapped it.I thought of knitting needles. I couldn’t find any. A Turkish colleague suggested bicycle spokes. We ended up buying more than a thousand bicycle spokes, sharpening one end of each one, turning with the other end over so we could pin to the seabed every little fragment of wood we found.

So at the end we have like a butterfly on a piece of cardboard all pinned down; we have thousands of sharpened bicycle spokes driven through every wood fragment all the wreck, holding it down while we map it.”

According to this NPR story, the bicycle spoke tactic became standard practice in underwater archaeology, at least for some years. I have not been able to confirm this information elsewhere, but would love to discover more information on the topic (hint hint- share the knowledge if you have more on this!). This kind of thing had never been done before–putting an ancient ship back together on the sea floor. There were barely enough fragments to tack the thing back together, and what wood was left had become massively delicate in the 1,000+ years it had been sitting there. Furthermore, scuba diving had only been invented a decade or so beforehand–in the 1940s–so the archaeologists could only be underwater for 20 minutes at a time in their intensely-cumbersome gear. Needless to say, Doorninck and Bass’ reconstruction proved to be a near-impossible feat.

And now for the big Byzantinian realizations:

The new theories took off with one of the Turkish college student/intern’s discovery of inscriptions on the amphoras (ancient jars) that had sunk with the ship (marine growth can hide those pretty well). Upon closer examination, the archaeologists realized that:

“The amphoras were made in uniform sizes, with uniform-sized mouths and uniform-sized stoppers. This showed that the Byzantines were using sophisticated mass production techniques more than a thousand years before the Industrial Revolution. They were way more advanced than anyone realized. The parts were uniform so that different components could be made all over the empire at different factories.” 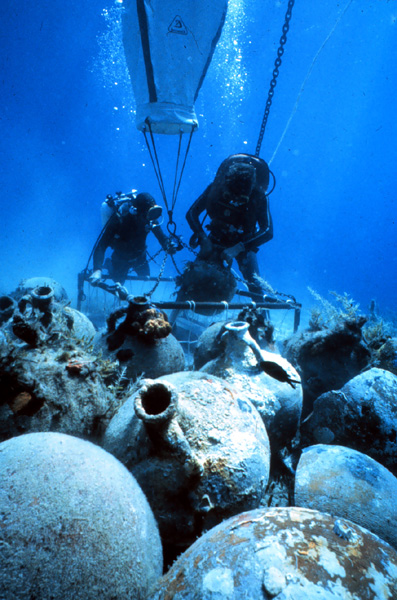 In order to raise a representative sample of the more than 800 amphoras on the shipwreck, large baskets and lifting balloons were employed. (Photo Credit: Institute of Nautical Archaeology)

Continued realizations had to do with this ships role in global politics and warfare of the day. One inscription told them that the captain of the ship had been a priest. Apparently, there were plenty of priest sea captains in the seventh century AD because the church owned many ships. (This ship sank in 626 AD, but how archaeologists determine this remains murky to me). Somehow (which some to that how, I’m also unclear), the archaeologists concluded that the church’s ship was transporting supplies for the military (in an example of yet another case of religion tied up with warfare…frustrated sigh…)

“In fact, Fred believes, on the day they ship sank in 626 AD, the church had lent the ship to the military to get supplies to troops who were fighting the Persian empire. It was the final year of one of the longest and most exhausting wars in the ancient world. The church’s involvement and those mass production factories were part of this remarkable military supply chain that Fred helped uncover. In part because of that industrial sophistication, the Byzantines, who controlled much of modern day Turkey, Eastern Europe, parts of Italy, all the way to Spain, defeated the Persians, who ruled over present-day Iran and most of the Middle East.

And at the very moment Yassi Ada sank, Muhammad was forming the armies that would, a few years later, lead to the Muslim takeover of much of the weakened Persians’ territory. Then those Muslim armies started fighting the Byzantines, Christians, in wars that would continue for centuries, and of course feel pretty relevant today.”

The findings point to a big and important moment in history. To add a grain of salt to these ancient political implications, though, I find it ironic that this excerpt begins with “in fact, Fred believes”–an oxymoron in itself. I am unclear as to how widely accepted Doorninck’s theory about the political significance of this ship is in the professional archeological world; that his theory is presented as fact by National Public Radio, however, certainly moves it toward being perceived as Truthful by the public sphere! Regardless, the story is juicy.

That said, I now want to return to my beloved bicycle spoke. This little bit of technology may be overshadowed in this story by some immense historical realizations and theories, but the note the spoke was present and useful! The bicycle is a fantastic intermediate technology through which to view human ingenuity and resourcefulness. Creative social possibilities by bicycle. Three cheers for re-purposing!

(A very similar post to this looking at the same thing,
but the author takes the “community and public archaeology” angle more strongly than the bicycle angle)

P.S. If you know anything else about the use of bicycle parts in archaeology, please let me know! For example, are they still used?